Varanasi is a world city. A strong feeling overwhelmed me in Varanasi, a sense of vertigo in the life-death union which refers to the dimension of the sacred, omnipresent in every stone of which the streets and palaces and temples are built. I could sense a wh... read more 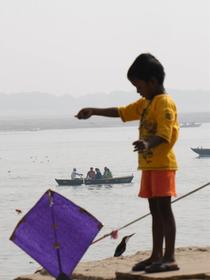 Varanasi is a world city. A strong feeling overwhelmed me in Varanasi, a sense of vertigo in the life-death union which refers to the dimension of the sacred, omnipresent in every stone of which the streets and palaces and temples are built. I could sense a whole, even in the presence of abjection, death, dirt and only through that contact and the awareness of all these aspects, I could discover a real mystical dimension of existence.
The presence of the Ghats, of these stone stairways inspired me so much. Along these transversal cuts, longitudinally positioned to the direction that the Ganges takes, from dawn to sunrise, children play and the inhabitants of Varanasi do their rituals, wash their clothes and also their boats handy for fishing; they also entrust some of the dead people to the flow of the river. It is therefore a place of great vitality, all the phosphorescences of reality, of the world as we know it and simultaneously it is the place where the dead are cremated and their ashes are entrusted to the Ganges, according to the tradition that those who die in Varanasi, even those who have sinned the most, have the right of access to the Absolute, to Brahman.
I perceived the presence of these ghats and palaces overlooking the Ganges as a sort of theatrical backdrop, but also as the place where the city hides, becomes invisible, does not allow itself to be photographed as a panoramic view...
The image of the child in my film is a central archetype of our existence, the eternal child, as Jung said. The child who plays with the kite carries two symbols: the play and the child. The play is meaningful, the same everywhere in the world. The child is the image of a blissful but lost existence that we hope to resume in the afterlife.
The very strong message that Varanasi embodies at the core is a profound humanism. Life can be unhappy, fleeting, full of pain, destined to end; yet, only as a human being, you will be able to reach definitive salvation.
The image of the fisherman who accompanied me on the navigation of the Ganges is a telling metaphor for the short journey that all humans inevitably have to make. A short journey compared to all cycles of lives, being them in the cosmos or part of the history of human beings.
The film tries to give a sense of our belonging to the cosmic dimension of humanity. Varanasi is an image of the existential story of mankind.

She contemplated radiant the ocean in front of the Peninsula Valdes and her breathlessness was lightened and finally undone. Getting lost in immensity, she broke herself free in life ... She was my sister.

This film stems from the confluence of two main situations: finding myself in this period of my life living in India and the concomitant circumstance of the recent death of my beloved sister due to an autoimmune disease.
The experience of traveling in Varanasi has allowed me to somehow take on and process my deep mourning. The sacredness of the great Ganges river merged with the river of my existence which became a tributary of the former one.
In Varanasi, the contact with the primordial is a given ... Varanasi always has to do with an existential journey, with something from one's own world that has gone into crisis and when you feel cornered and lost, you want to discover a more authentic meaning and to sanction a transformation.