What the film begins with, is absolutely gorgeous and captivating. The young Ronan, the beautiful Knightley and McAvoy, their extremely intense chemistry, sets the pace for a period drama, that ends up devastating the viewers. The film is beautifully made, the... read more 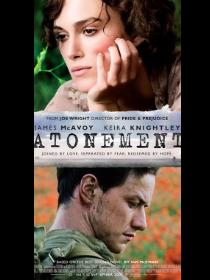 What the film begins with, is absolutely gorgeous and captivating. The young Ronan, the beautiful Knightley and McAvoy, their extremely intense chemistry, sets the pace for a period drama, that ends up devastating the viewers. The film is beautifully made, the characters are well created, and breathed life into extraordinarily, by Ronan, who's character portrayal is one of the best, by McAvoy's humility, the man of earth, educated in Cambridge - a subversion of his working-class background, the charming and undaunted Keira Knightley, and not to forget the craft of Benedict Cumberbatch's facial expressions, as that gave away his paedophilic intentions.
The film movies smoothly, and subtly, until the end, where everything turns upside down. It is a characteristic of the metafiction novel that is, on which the film is based, of the same name.
The death of the characters are emotional, as the brutal World War plays the template against which their destinies are destroyed. The grotesque portrayal of the real horrors of the war, what it did to the soldiers who yearned to their death to return home, but never could; who died without having anything to drink, who were left in foreign lands, wounded, and forgotten by the Empire.
The many, many who lost their lives just for the clash of pride of Imperialism, the mistakes of others' that ruined lives, and there was no going back.
In the end, the truth is accepted by the writer, the pain was unbearable. The evacuation of Dunkirk is shown so real, it had the most heartbreaking scene. Now, I can tell only one thing, the end makes our heartbreak into millions of pieces.

Joseph Wright (born 1972) is an English film director. His motion pictures include the literary adaptations Pride & Prejudice (2005) and Anna Karenina (2012), the romantic war drama Atonement (2007), the action thriller Hanna (2011), Peter Pan origin story Pan (2015), and Darkest Hour (2017), a political drama set during World War II.
Wright's feature film was an adaptation of Ian McEwan's Booker Prize, shortlisted novel Atonement, which was released in 2007, reuniting Wright with Keira Knightley, and also stars James McAvoy and Saoirse Ronan. On 13 December 2007, the film was nominated for seven Golden Globe Awards, more than any other film that year. Though Wright himself was not nominated for director, the film received seven Academy Award nominations, winning only for Best Original Score. At the BAFTA Awards, it received 14 nominations and went on to win for Best Production Design and Best Film.