Betrayed and arrears, Jorge deducts all your anger at the bricklayer working at his home. However, at times, banal decisions have unexpected consequences. 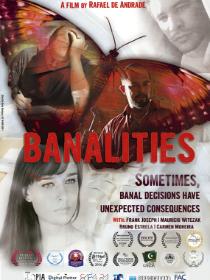 Betrayed and arrears, Jorge deducts all your anger at the bricklayer working at his home. However, at times, banal decisions have unexpected consequences.

Born in Rio de Janeiro he has a PhD in Science (2008) and graduate in Audiovisual Production from the Faculty of Social Science and Technology of the Federal District - FACITEC (2010). Has participated in about 15 short films, first as an actor, writer and editor and, since 2007, has also been working as a director. His experience also includes 3 towards advertisements that are transmitted over the Internet. Among the short films that participated are the following 40th Birthday (2005), as a writer, actor and editor (selected for the Varginha Festival 2005), Modernity (2002) and equilateral (2003), as an actor, editor and writer (both selected for the Brasilia minutes Festival 2003), The Kiss First (2007), as a director, cameraman and editor (selected for the competitive exhibition of the 7th Student Video Festival and Exhibition of Cinema - Guaíba/RS; Love is Beautifull.... (2008), as a screenwriter, cameraman, editor and director (selected for the 16th of Teresina Video Festival and the Montes Claros Moving - First National Festival of Northern Minas Cinema "; The DVD (2009 ) with director, writer, cinematographer and editor (selected for the 9th Mostra Wansbeck Film and Video and 4th Shows Short Audiovisual de Campinas (2009), Session Short, selected for the show Brasilia Digital 43 Brasilia Festival of Brazilian Cinema (2010). Finally Alone! (2011) where in addition to signing the screenplay, worked as a director, editor and cinematographer, was selected for Ibero-American Festival of Film and Video (Cinesul) 2011, 2nd Exhibition SESC Film and Video Brasiliense , 38th International Day of the Bahia Cinema, 11th edition of the Festival Iberoamericano de Sergipe Film (SHORT-SE), 7th Short Ourinhos, VII Short Canoe, VI Exhibition of Film and Video Miracema, III Itinerant Film Festival of the Portuguese Language and the Public Call Notice for registration, selection and licensing of audiovisual works of TV Brazil. He directed, scripted, filmed and edited the short film The Pizza (2011), selected for the III Travelling Film Festival of the Portuguese language. Scripted, filmed, directed and edited the short film Costume Party (2012), selected for the V Cine Creed of Porto Alegre and Brasilia Shopping shown in the short show in 2014. In 2013, Rafael de Andrade wrote and coordinated the preparing the Feature Film Project "Capital Zero" with funds from the Support Fund for Culture of the Federal District (Notice 1/2012). In May 2015 launched the short Dog’s Televisor, in which signs the direction, photography, art direction, editing and assembly.