Breaking news comes over the radio, announcing the escape of a mental patient, who is also mass murderer. Johnny Talbot, a young drifter, hears the news on the radio, as he's smoking a joint, while driving a VW Beetle, towards Provincetown. Not p... read more 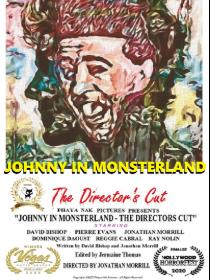 Breaking news comes over the radio, announcing the escape
of a mental patient, who is also mass murderer.

Johnny Talbot, a young drifter, hears the news on the radio,
as he's smoking a joint, while driving a VW Beetle,
towards Provincetown.

Not paying full attention to the road, Johnny accidentally hits
a hitchhiker, pulls over, and puts the victim in the trunk of the car. Johnny drives into a wooden area, and drops the body off
on the side of the road.

He is about to leave, when he sees three witches approaching
the corpse body.
The witches bring the zombie to life, and thus begins an introduction to a gallery of famous monster vignettes,
which are all connected by Johnny Talbot,
who is revealed to have psychological issues.

The main nemesis of Johnny is Nosferatu,
a centuries old vampire with supernatural powers.
Nosferatu has a minion named Renfield, the aforementioned mass-murderer, who has been ordered to capture Johnny by his master.

In the midst of dream and nightmare sequences,
Johnny encounters a mummy, who has a vendetta against
fashion and art collectors, werewolves, sea creatures, mad doctors, and their failed laboratory experiments.

The climax occurs during a storm on the Provincetown breakwater, between Johnny and Nosferatu.

He is known for directing and starring in such cult films as
"The Left Side of My Brain" and
"The Brides of Johnny in Monsterland".

He is the Executive Director of Phaya Nak Pictures,
an independent, Hollywood-based Production Company.

Jonathan has appeared, as himself,
in E Entertainment's televised series
"Mysteries & Scandals: Bela Lugosi",
"New Hampshire Chronicle",
and the HBO original film; "The Young and The Dead".

Jonathan Morrill has produced over 200 short subjects,
and music videos, since 1985.
His clients include Jan and Dean, The Smashing Pumpkins,
Multi-Color House. Too Loose La Trek,
Jenifer McKitrick, and Pictures of Reason.

Jonathan Morrill was Theater Manager of
The Director's Guild of America, in Hollywood, California,
when HBO's "The Young and The Dead"(2001),
a film that he is featured painting an original Valentino portrait in, made it's premier at the very theater that he was managing.

Jonathan was the personal assistant to Kirk Douglas,
at The Director's Guild of America's special event screening of "20,000 Leagues Under the Sea" (1954), in 2001.

Jonathan Morrill began his appointment with the
UCLA Film & Television Archive on February 1st, 2018.
Among the many newsreels, short subjects, television shows, and feature films he has helped to preserve, one of his early assignments was the restoration of many "Poverty Row" titles. These titles including "The Vampire Bat" (1932).
"The Sin of Nora Moran" (1933) , "False faces (1932)",
"Damaged Lives" (1933), "Mamba" (1930), and
"Strange Illusion" (1945).
These "Poverty Row" titles all had consecutive Hollywood Gala Premiers, of their restoration, at Raleigh Studios in Hollywood, from October through December, of 2018.

Most recently, during the global pandemic in 2020, Jonathan Morrill was able to produce rebooted, and director's cut versions,
of unreleased projects, and entered them into the festival circuits, winning several awards in the process.

There is an exuberant feeling that generates from the nerves,
if in your career as a film director, you get the unparalleled experience a successful premier of your motion picture.

I have been fortunate to have been having this experience throughout my eclectic cinematic career.

As I mature not only in life, but in my creativity,
I feel that I have reached the brink of understanding
the complete equation of show business.

That it's a two part term.

You can't have the show people running the business,
and vice versa. Fortunately, I can manage both parts.