Alentejo Late Afternoon is an aesthetic essay on the earliest sources of the art of cinema: light, movement, sound and pretense. Using Alentejo’s landscape as the canvas and the camera as an instrument for the expression of an original look, a cinematographi... read more 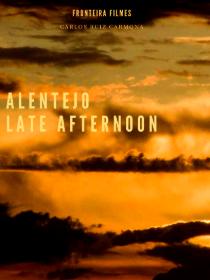 Alentejo Late Afternoon is an aesthetic essay on the earliest sources of the art of cinema: light, movement, sound and pretense. Using Alentejo’s landscape as the canvas and the camera as an instrument for the expression of an original look, a cinematographic
structure is created around references to the history of cinema, a revisiting of forms, styles and models that made the cinema and its more direct antecedents: photography, painting, music, theater. The evening light is approached as if it were a character, dressed
in all the emotions so many are the changing colors that runs through the entire spectrum of visible light. In this sense, in Alentejo Late Afternoon the landscape and the sunset are the pretext to expose, with shamelessness, the invisible joy of creating cinema, this
admirable new world of representation, emotion and discovery. Such as the Alentejo landscape that is represented here as the protagonist of a film of a universal time and place.

In 2004 Carlos Ruiz directs and produces his second feature film: Portrait, an award wining feature documentary which has participated in many International Film Festivals such as Taiwan, Ankara, Rome, Madrid, Mexico, Cadiz, Helsinski, DocLisboa and Tui-PlayDoc. In 2005 Portrait won Best Spanish Feature Film at the International Documentary Film Festival of Madrid, Spain. In the same year the film was awarded an Honorable Distinction at the International Documentary Film Festival of Tui, Pontevedra, Spain. In 2009 and 2010 Portrait was selected and distributed internationally by Miguel Cervantes’ Institute. The program included multiple long-term exhibitions in Mexico, Moscow, Shanghai, Stockholm, Beijing, Rome and Casablanca. In 2013 was selected and exhibited worldwide by Eurochannel in Europe, Asia and America.

CRU/RAW represents his last feature length documentary work. This film took almost a decade to be produced. The narrative includes content shot on institutions such as the Tribunal, the Hospital, the University, the Police, and the Prison.

Late afternoon in Alentejo initially arises from the will to pictorially portray and imortalize Alentejo’s light and color in a plastic way as if it were a painting. This passion emerges after many moments of contemplation of the landscape in several places of that region
and the changes of color and light at different times of the day, with special emphasis on the twilight, that moment when the sunset pre-announces the birth of the night. The perfect metaphor for the cycle of death and life that will come at dawn the next day. In this way, this project has as its first motivation a fascination for the observation of the Alentejo landscape which, for the director, represents a universal microcosm and that refers to and recalls great works of painting.
It is not by chance that the title Late Afternoon in Alentejo refers to the titles of so many paintings by artists such as Van Gogh (Avenue of Poplars at sunset), Claude Monet ("Sunset", "Grainstick at sunset"), WilliamTurner ("Sunset") to name a few, whose fascination with the light of the setting sun on the landscapes, beings and objects, we can
admire.
Thus this project comes to light intuitively from the view of the director who as a painter of the classical period goes in search of the light to portray, imortalize and share his experience, his pictorial vision of the sunset in Alentejo.
During this process and as a director I realised that the landscape was "artificial", that is, it was sculpted, organised, built by the all powerful hand of mankind. Apart from the clouds, the skies, the insects, the rocks, some trees, little or almost nothing remains of its
original past. The landscape represents a vast sculpture shaped by the hand of man, an immense canvas although of human proportions, because in Alentejo the extension is still of a human measure.
From this detailed observation unfolds a reflexive and poetic dialogue between me, the manipulative director, and the transformed, domesticated nature. It is this dialogue that defines the aesthetic treatment of the film. A dialogue that will put in parallel, sometimes
in contrast, sometimes in harmony, the nature observed in the Alentejo landscape during and just before sunset and the very construction of the film narrative. This dialogue is
expressed in several domains throughout its construction: in sound, light, composition, narrative structure, contemplation of simple events, patient waiting at the right moment,
objects and fragile events, sometimes imperceptible, in the way of the look, in the search for simplicity in the look, in the way of seeing the Alentejo.
The sounds of natural environments and non-diegetic artificial sounds are continually confronted throughout the cinematic narrative by constructing a reflective and poetic dialogue that draws attention to the construction and artificiality of the object and the
environment.
Mechanical sounds of a rewinding tape, distorted sounds, electric noises, moments of silence, the rustling sound of a paper, among others interrupt the narrative experience intending to refer the viewer out of the film, to the editor's desk, to the act of manipulation
and narrative construction. This sound-alterations that changes between the recreation of natural sound ambience and the interruption with non-diegetic artificial sounds intends to
create a space for reflection and draw our attention to the fact that what fascinates us, the Alentejo landscape, is as artificial as its cinematic representation.
The search for light, plastic composition, waiting patiently for the right moment to connect the camera and record, also seeks to evoke the beauty of so many and varied landscapes
that inspired the work of numerous painters and, in this sense, seeks to honor the landscape as a source of inspiration and the authors themselves that serve as reference for the visual creation of this work.
On the other hand, this search for light intends to portray the beauty of what is still nature in the landscape constructed, pass the pleonasm. Trees, wind, textures, earth, plants,
insects, water, elements, still exist, and still beautiful, still refer us back to the origins, at the beginning of everything. In this way the narrative becomes a homage to life and an
appeal to the preservation of nature. In the background, the cinematographic narrative suggests to the spectator new ways of extracting meanings from the landscape, its
objects, its forms, encourages them to discover new ways of seeing the Alentejo, to appreciate the ancient primitive nature that no matter how much is transformed always remains present in its essence.
The Alentejo is a characteristic landscape, defined, with a very strong identity. But the film presents, through the frames, the composition choices, the elements that the camera captures and how it films it (rocks, water mirrors, trunks of twisted trees, the effect of the
wind in the herbs, clouds, insects that devour other insects, etc.) an universal landscape as a pictorial motif, the landscape as emotion withdrawing it thus from its geographical rationality.