Miracle! Mother Nature has appeared to me (2019)

This short film celebrates the beauty, charm and generosity of Mother Nature, seeing her not as a mere object to be used by us, according to the worldview of “civilized” man, but as a Someone with whom we should have a loving relationship as children. Thro... read more 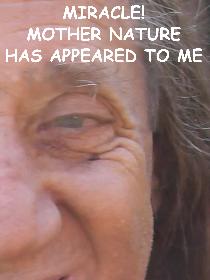 This short film celebrates the beauty, charm and generosity of Mother Nature, seeing her not as a mere object to be used by us, according to the worldview of “civilized” man, but as a Someone with whom we should have a loving relationship as children. Through this perspective, we will be able to get a glimpse, through Her, of our Father.

He lived an intense life, rich in vital experiences and frequentations of various types of people and environments not homologated to the prevailing social schemes, characterized by a symbiotic relationship with Nature, with a particular predilection for the sea and the sun, constantly striving to an intense search for answers to the great existential questions: why do you suffer? why do we die? Does God Exist? and if it exists, can we have a relationship with Him? why has man created a social structure that makes people unhappy? ...Drawing on the wisdom contained in various texts on Western and, above all, Eastern philosophy, he finds theoretical support from authoritative sources for his path characterized by a lack of interest for that frenetic and superficial lifestyle typical of the model proposed/imposed by the consumption-driven and profit-led society. In the first years following his adolescence, he has lived residing mainly in self-managed farms, ashrams and municipalities to Florence, Rome and Bologna, trying to lead a simple but profound life as taught by the Wise Men of all time.
In the course of his life, he has been providing for his own basic needs by doing several short-term jobs.
In the second half of the 80's he enrolled at the Academy of Fine Arts in Bologna, where he obtained his degree in Painting, and embarked on a pictorial journey with exhibitions throughout Italy. Towards the end of the 90's, advised by various people who appreciated his natural vis comica, he decided to start a training course as a comic actor, attending in 2000 the Permanent Comic Laboratory directed by Bruno Nataloni, Corrado Nuzzo and Sandra Cavallini, an interesting experience that allows him to begin to acquire awareness of his potential in a professional perspective. After some other formative experiences and the participation in some comedy festivals, the meeting with Tommaso MiceliMalaguti inaugurates the beginning of an artistic research that goes on continuously since May 2008 and that has produced the realization of two satirical/existential comic theatre works: "I'm sick outside" (debut June 27th 2009 at Teatro del Navile in Bologna) and "Or you're busy Or you're unemployed!...we were men, we became workers" (debut June 2nd 2015 at Teatro del Lampadiere in Bologna). He debuted in video art in 2018 with the work “Applause to Mother Nature”, of which he is the author, director and performer and with which he participated in OFF Ortometraggi Film Festival of Borgagne (Lecce) in the same year. In 2019, he produced the short film “Miracle! Mother Nature has appeared to me” in cooperation with Tommaso MiceliMalaguti

1986
He participates as an actor and set designer in the opera "Theater Gotzenhain" (La barba del conte) by I. Calvin in the replication represented in Pfoorzheim (Germany).
1988
- He oversees of the scenography in collaboration with Lino Marra of the opera "Il Dibbuk" staged by the Company "Istituto di ricerca teatrale" Bologna, performed at the Teatro Bellinzona in Bologna, defined as "sober but intense" in a review published in the Resto del Carlino of January 27, 1988.
- He participates as an actor and set designer in the opera "L’enigma della sesta vocale" staged by the Company "Centro teatrale Roselle" at the Festival dell’Unità di Bologna.
2000
- Co-starring actor in the short film "Continua" produced by Bradipo Film directed by Riccardo Sai. This short film participated in the Festival degli Ultracorti of Rome.
- Attends the "Laboratorio comico permanente" conducted by Sandra Cavallini, Corrado Nuzzo and Bruno Nataloni.
2004
Participates in the "Festival cabaret emergente" (Modena).
2005
Participates in “Premio Totò alla Comicità”.
2006
Takes part in the Comedy contest “B. Bellissimo” (Teatro Astra, Bellaria).
2007
Participates in the "Festival nazionale e internazionale della risata" (Muggiò).
2009
- Actor in the short film "Il venditore" directed by Ruben Maria Soriquez.
- On June 27 (replication on the 28th) he made his debut at the "Teatro del Navile" in Bologna with the show "I'm sick out" written and interpreted by him, directed by Tommaso MiceliMalaguti.
The show is repeated several times in the same theater during the 2009-10 season.
From the 2010 to the 2013 replications in theaters and unconventional places in Bologna (main theaters in Bologna: Teatro Fantomas, Teatro Tivoli, Teatro San Salvatore).
Representations outside the province of Bologna: 2010 (from 7 to 10 January) "Teatro Abarico" in Rome - 2010 (20 March) - 2011 "La casa degli artisti" Lecce (8 August) and Biblioteca comunale di Rimini (2 March) - 2012 (31 March) Teatro Aldo Fabrizi di Morlupo (Rome).
2015
On 2 June he made his debut at the Teatro del Lampadiere in Bologna with the show he wrote and performed "Or you're busy Or you're unemployed" (directed by Tommaso MiceliMalaguti). Replication in the same year on 24 October of the same year as part of the "Fermata Teatro" review.
2018
He took part in OFF_Ortometraggi Film Festival di Borgagne (Lecce), with the short film "Un applauso a Madre Natura" of which he is the author, director and performer.

Degree in Painting from the Academy of Fine Arts in Bologna

THEY HAVE WRITTEN ABOUT HIM

“The artist has presented recent works that reflect the presence of an investigation thanks to which he has moved from paintings that are aimed at a pictorial matter whose nature is almost lyrical and in which the sign is (we would say) hidden, to others, the most recent ones, characterised by a more aggressive taste. Here, the pictorial matter acquires greater and more decisive violence, while the sign, having become authoritative, ends up coming out from the surfaces, invading the third dimension and solidifying thanks to the use of iron wire or other materials. These latest works are those we liked the most since we could identify greater compositional freedom combined with what we would call an unstoppable expanding force”. Roberto Vitali, art critic, “Mongolfiera”, 9/89

“Mario Pascariello’s painting finds its roots in the climate of the 1950s and 1960s. Let us think about Scanavino and the informal and expressionist painting of that period. It seems that in his latest paintings, it is possible to identify an ecstatic will aimed at defeating the form. A rough painting, made of ample gestures, but rich in moods; abrupt, but sometimes courteous and gentle.”. Giovanni D’Agostino, painter and professor at the Academy of Fine Arts in Bologna, on the occasion of “Presenze giovani nell’arte”, a group exhibition that took place in 1990 at Circolo Culturale Bertolt Brecht, in Via Padova 61 in Milan.

“His oil canvases are full of evocative magnetism. His watercolour paintings capture the viewer’s gaze projecting it towards further worlds”. Tommaso MiceliMalaguti, director and writer

1996 Course of journalism and narrative writing organized by the magazine Storie.
1998-99 He attends the School of Theatre "Bibiena" directed by Giorgio Trestini,
2001 Degree in philosophy at the University of Bologna with 110/110 marks and honors.
2002 Internship on comic theatre at basic and advanced level directed by Domenico Lannutti and Bruno Nataloni, at the Teatro del Navile.
2002 Diploma in acting at the Scuola di Teatro del Navile in Bologna directed by Nino Campisi.
2002-3 He performs with the Theatre Company "Comic Parade" in various clubs and theaters in Bologna and its province.
2003 Finalist of the "Satirainvece" Festival of Treviso.
2009 He directed the satirical/existential comic show "I'm sick outside" by and with Mario Pascariello, premiered on June 27, 2009 (repeated on June 28) at the Teatro del Navile in Bologna as part of the series "Destati i sogni festival", and several replicas in theaters of Bologna.
2010 Publishes the book "Ct Ombra" (open letter to the current Ct of the National and, for information, to those past and future), Editrice Nuovi Autori di Milano.
2011 He founded the Cultural Association "SinergiadeiSoli" together with Mario Pascariello and Daniele Dall'Omo.
2013 He publishes the book of reasoned satire "La 'storia' della 2° Repubblica" (the sunset of the spartycracy caught with the aim of satire), Edizioni Simple by Macerata.
2015 He directs the satirical/existential comic show “Or you're busy Or you're unemployed!...we were men, we became workers” by and with Mario Pascariello, performed for the first time on June 2 at the "Teatro del Lampadiere" in Bologna.
2019 Co-director of the short film “Miracle! Mother Nature has appeared to me", made with Mario Pascariello.