“Cru” means “rough”, “raw” or “sore”, all of which applies to this sequence of scenes by Carlos Ruiz Carmona – snapshots of the Portuguese city of Porto, collected over almost a decade. There are movie kisses and vigorously fucking bodies, tr... read more 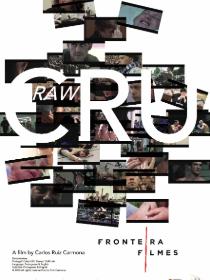 “Cru” means “rough”, “raw” or “sore”, all of which applies to this sequence of scenes by Carlos Ruiz Carmona – snapshots of the Portuguese city of Porto, collected over almost a decade. There are movie kisses and vigorously fucking bodies, trembling hands and sex for money. Communion wafers crack and teeth are knocked out. The images are anything but glamorous but highly

charged: they show tense and often aggressive people. Carlos Ruiz Carmona’s Porto is a field of energy where tension keeps building and is discharged all over the place, where people are receivers or transmitters of those currents. The film seems both distant and intimate because its director, while renouncing all direct communication, is a penetrating observer. One who is most interested in the surfaces under which things are seething, ready to burst – be it in the shape of eczema, a blow or a birth.

In 2004 Carlos Ruiz directs and produces his second feature film: Portrait, an award wining feature documentary which has participated in many International Film Festivals such as Taiwan, Ankara, Rome, Madrid, Mexico, Cadiz, Helsinski, DocLisboa and Tui-PlayDoc. In 2005 Portrait won Best Spanish Feature Film at the International Documentary Film Festival of Madrid, Spain. In the same year the film was awarded an Honorable Distinction at the International Documentary Film Festival of Tui, Pontevedra, Spain. In 2009 and 2010 Portrait was selected and distributed internationally by Miguel Cervantes’ Institute. The program included multiple long-term exhibitions in Mexico, Moscow, Shanghai, Stockholm, Beijing, Rome and Casablanca. In 2013 was selected and exhibited worldwide by Eurochannel in Europe, Asia and America.

CRU/RAW represents his last feature length documentary work. This film took almost a decade to be produced. The narrative includes content shot on institutions such as the Tribunal, the Hospital, the University, the Police, and the Prison.

RU / RAW - director’s note
"Cru" (Raw) is an observational documentary film shot and produced in Porto, Portugal. On the one hand, this film partly falls under the genre where a specific point of view of a city, its existence and identity grows into a full character. On the other, also falls in line with the observational documentary practice without interviews, testimonies or voiceovers. The film took almost a decade to be concluded. The narrative includes content shot on institutions such as the Tribunal, the Hospital, the University, the Police, and the Prison.
The film intends to discuss and question modern society values and human nature through a non-linear contemporary portrait of intimate life stories. The narrative does not intend to focus on a specific character or on a single theme or story. A web of life stories, events, spaces, institutions, professions, traditions appear interwoven by an urban symphony of contrasts, of distinct realities, constituted by multiple perspectives. The editing interrupts speeches, raises questions which does not answer, presents only sections of events, without introduction, without exposition or context, without any warning.
The narrative does not repeat events, spaces or characters. No character takes on the starring role in the film. The storyline "travels" freely, with no apparent direction, drifting in and out of spaces. It presents only sections of life-stories, without judging or argumenting any specific point of view. Stories, traditions, Institutions, life experiences, professions, spaces, flow disruptively in the non-linear open narrative. "Cru" organizes and displays its contents so as to give the sensation to the viewer that the structure is "random" and raw. The intention is to give the sensation that the narrative is still in construction. The sequence of events does not seem to not obey to any rules or answer any logical or casual direction. The storyline does not allow the spectator to anticipate, guess or imagine what the following content will appear in the film. The structure emerges by comparing and contrasting different realities and subjects that aim to create a common ground for reflection. Audiences must surrender to a non-predictable audiovisual journey and focus on learning and thinking about contemporary culture and society. The narrative in the form of a mosaic presents themes such as violence education, health, poverty and justice as the main body for reflection; questioning the role of our institutions in the organisation of everyday life and the ethical and moral quality of our society.