Erik and Gunnel met each other in their teens but then Gunnel suffered from polio and became paralyzed. The fate of his girlfriend led Erik to become a doctor wanting to find out how disease occurs. He received the ethics committee approval to do research on M... read more 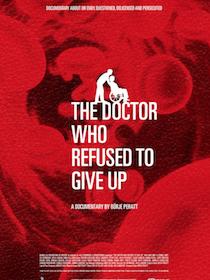 Erik and Gunnel met each other in their teens but then Gunnel suffered from polio and became paralyzed. The fate of his girlfriend led Erik to become a doctor wanting to find out how disease occurs. He received the ethics committee approval to do research on MS patients and used an increasingly advanced method of diagnosing blood. He also found a treatment method that helped against several serious diseases also chronic. His discoveries may have been revolutionary but they were opposed to the current medical paradigm. He did not give up and took up thousands of patients. Despite great success in treating sick people, he has been punished by injustice. It develops into a thriller that follows how Enby has been subjected to a plot to throw him into prison.

Own
Worldwide: All Rights

A journalist, who contributed to a book about Dr Erik Enby, contacted me several times to persuade me to make a movie about this man. I refused on several grounds, one being that I didn’t have the time. I was also concerned about what an investigative journalist might uncover, leading to me getting involved in something that would be mentally and emotionally stressful and to distractful for my main film projects.
So I asked the journalist, Ulla Premmert, to summarize the key points on which I could make a decision. She said this was not possible, giving me a reason to say no. Then the summary arrived (on a single page!) totally removing my objections. So now I needed further information to investigate different views. Strangely enough, I could find no entry of Dr Enby in the Swedish Wikipedia but there was something in the English version. However, it seemed poorly constructed. To find out more about the knowledge of the general public, I created a Swedish Wikipedia page. This may be a way to get useful facts from other. It was immediately taken down and this was before 7 am! I challenged the violation of Wikipedia’s policy and the article was reintroduced. Soon after, it was attacked by several sceptics; I then realised that there were a number of peculiar motives behind the persecution of Dr Enby. During this exchange with Wikipedia I took the decision: a documentary is required. My opposition to these “guerrilla tactics” by sceptics led to them blocking me; this was in summer of 2015. Wikipedia was clearly contaminated by or in the hands of the sceptics’ movement.

The story of Erik and Gunnel was vital. I would not be able to look at myself in the mirror if I had not gone ahead. I understood why I had been “chosen” and had been asked to do it: for five years, I had investigated the sceptics’ movement and found many odd actions that do not belong in a democracy. The person making this movie would have to resist any challenge or obstacle. Further, it meant investigating the media in its entirety, which would include former employers and it could be considered unforgivable to criticize them. Given this, it would be difficult to get the movie shown on TV or reviewed in the mainstream media, as they were on the side of the “villain.”

The first person I wanted to interview was Professor Dan Larhammar who seemed to be central to the criticizm of Dr Enby, and thus very important to listen to. Dan Larhammar is used to being interviewed on radio and television but refused to be interviewed by me. What was he afraid of? Instead, he wrote an article stating that the movie was biased in favour of Dr Enby – even before production had begun! If he considered in advance that the film was biased, now he had the opportunity to present his point of view. Did he sense that I would see through him? I searched all that he had written and the recordings of his statements about Dr Enby and secured that I was given permission to use them in the upcoming documentary.

I found no grounds for Larhammar’s statements, instead they were what we today would call “fake news.” How could Swedish media release these slanders without checking the facts? That was the next task – interview my colleagues. Yes, this could be perceived as cross-examination. Other doctors and researchers critical of Dr Enby were also interviewed. It would then be up to the audience to decide what was fact or fiction.

The story grew, becoming more than double the originally-planned time of 45 minutes. It had now reached 100 minutes, with much essential information remaining. In the end, I managed to cut it to 1 hour 52 minutes. Would the audience cope with such a long documentary? One of Sweden’s largest TV channels, TV4, offered to show the movie in two parts. It did not feel right and I decided on a sneak preview at 3 pm in a cinema in Stockholm, to which journalists were invited. Not many journalists showed up; however, a large paying audience did. It felt like a blockbuster! The reaction was overwhelming. With renewed confidence following the audience’s positive response, we had growing expectations for the premiere at a large cinema in Gothenburg. The cinema was sold out, one row being taken by sceptics who tried to disturb the screening. They failed. Subsequent screenings were also fully booked. The film has now been shown in cinemas all over the country for over a year.