In 1942, an epic naval operation was mounted to relieve Malta from the onslaught of attacks by the Axis forces. Codenamed ‘Pedestal’, the men who took part in this operation went through hell. Some lived to tell the story. 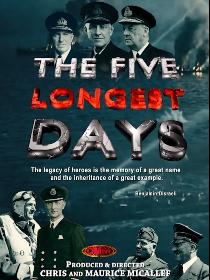 In 1942, an epic naval operation was mounted to relieve Malta from the onslaught of attacks by the Axis forces. Codenamed ‘Pedestal’, the men who took part in this operation went through hell. Some lived to tell the story.

The critically-acclaimed winning documentary about ‘The Phoenicians’ which has garnered no less than 28 international awards amongst them the Grand Jury Prize in the IMDB rated New York International Film and Video Festival in 2005, brought to life the Phoenician world as never seen before and deals with who were the Phoenicians, what were they famous for and what was their effect on the Maltese population.

The ‘Tal Qadi stone’ another documentary directed by Maurice Micallef investigates the interpretation of this unique fan-shaped stone which was found in the limits of Burmarrad near the Tal Qadi temple. This documentary won 20 international awards in film and video festivals around the world amongst which was the Jury Award in the Mountain Film Festival in 2013 held in the USA.

The documentary ‘Hal Far Airfield’ was awarded Best of Show in the Best Shorts Competition held in the USA in 2014. This documentary traces the history of Hal Far Airfield. According to the competition’s website (http://bestshorts.net/past-winners/winners-march-2014/), the film is impeccably researched and includes extensive original wartime footage combined with re-enactments of Maltese Army Regiments and the British Royal Air Force. Reference is made to this carefully crafted, informative documentary which was created by master filmmakers Chris and Maurice Micallef. It deserves a wide audience according to the publicity provided by the competition organizers. Best short awardees have won Oscars and Emmys in this festival. In this same competition in 2013, the Best of Show animated film Mr Hublot had won an Oscar for an animated short film.

The documentary ‘The Unsolved Mystery’ about the Maltese cart-ruts has managed to win no less than 30 international Awards in various film and video festivals. In the IMDb rated Impact Docs Awards Festival 2017, the documentary was awarded for history, research, documentary feature and direction. At this same festival, the documentary ‘The Man who saved the world’ by Peter Anthony won best of show. The documentary also had appearances by Robert De Niro, Matt Damon, Ashton Kutcher, Walter Cronkite and Kevin Costner in one of the documentaries presented for this competition.
Maurice is also a multiple-award winner with different documentaries in the WorldFest-Houston, the third longest-running International Film Festival in North America, and the Oldest Independent Film Festival in the world. WorldFest’s mission is to recognize and honour outstanding creative excellence in film & video, validate brilliant abilities and promote future filmmaking in Texas as well as enhance cultural tourism for Houston and the environment. Past Worldfest winners include Steven Spielberg, George Lucas, Ang Lee, John Lee Hancock, Randal Kleiser and the Coen Brothers.
The Kannizzati Fishing documentary won 41 international awards in various film and video festivals around the world, amongst which include IMDb rated competitions in Hollywood.

Today Maurice is retired. Throughout his filming career, Maurice managed to win 678 awards in international film and video festivals on four continents. Between 1954 and 1959 he worked at Saint Luke’s Hospital as a radiographer and later at the bacteriological laboratory. Later in 1964, he was the technical officer at the Malta College of Arts Science and Technology at Msida. Maurice Micallef M.O.M. was appointed as a Member of the National Order of Merit during the 2014 Gieh ir-Repubblika for his continuous drive in promoting Maltese cultural heritage through his documentaries.

Our mission at CMM is to promote Maltese heritage and culture abroad through our productions.