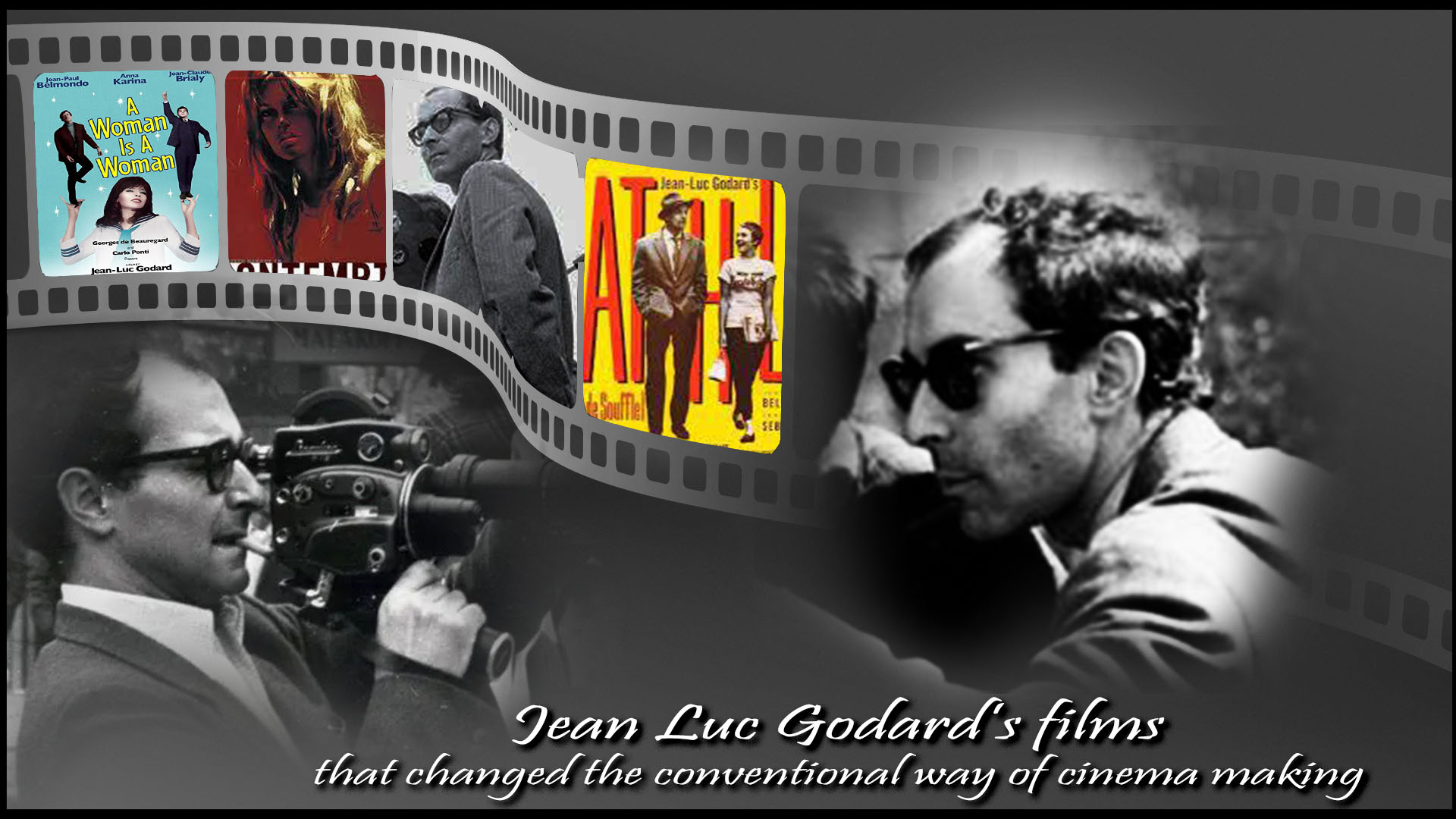 “A story should have a beginning, a middle and an end, but not necessarily in that order”: Jean-Luc Godard

The legend is no more unfortunately; he died peacefully, surrounded by his family at his home, in Lake Geneva. But he left a legendary legacy behind. He made films which changed to conventional route permanently. He pioneered a new wave of cinema, and transformed the industry. The man himself is none other than Jean Luc Godard.

Not every revolution comes with screaming and violence, some comes through the camera lenses and solid story telling. This is exactly the path that Godard chose to bring revolution in cinema fraternity and history. One of his most notable early contributions to film is a critique of an earlier book by Bazin and defense of the usage of the “shot-reverse shot technique.” He also collaborated with Truffaut and made some short films in 1950’s.

What has been game changer for him is his 1960’s film Breathless.

This was a very risqué film in that contemporary time. It had no pre-written scripts, shot in complete guerrilla mode (by handling hand-held camera), also had broken all continuity conventions from earlier days. His lively young performers, Jean-Paul Belmondo and Jean Seberg, were permitted to wear clothes that they felt comfortable in, and wore no makeup. The effect was revitalizing and energizing.

Godard’s overuse of jump cuts and unconventional editing approaches encapsulated the attitude of postwar Paris: an overpowering sense of freedom, a fascination with modernity, a disdain of authority, and a disconnection from normal moral frameworks.

Godard mingles with the American musical style in this film, providing a fun homage but with his customary scholarly sarcasm. It is a story about a love triangle between an exotic dancer, her lover and his best friend. Through this movie, A Woman Is a Woman Jean played with gender expression and woman identity, in the most light hearted manner. Anna Kerina as the exotic dancer is complete bliss to our eyes.

This is a seminal film by Godard, a lively and poignantly sad character study. It is certainly the most approachable of his films, with a disturbing, repeating subject and stunning visual design. In Vivre sa vie Anna Kerina played the role of a young Parisian girl, who has a dream of becoming a actress in her eyes, but unfortunately, because of some of her bad decisions ended up being prostitute.

This is Godard’s first commercial picture, a star-studded drama with big-budget support and Brigitte Bardot lighting the screen on fire. Contempt portrays Michel Piccoli as a screenwriter divided between the demands of a proud European director, an arrogant American producer, and his estranged wife, Camille (Bardot). This is a fantastic portrayal of a delicate marriage crumbling under duress. Contempt, filmed in CinemaScope and Technicolor, is aesthetically gorgeous, with graceful tracking views and lovely red tones in every frame, demonstrating Godard’s preoccupation with color.

Weekend is a satirical comedy film- portraying black comedy where a society is selfish, narcissistic and very much greedy. This film features a very renowned tracking shot. Godard’s Marxist opinion shines through when a bunch of young guys travel to French countryside to claim the dead relative’s property.

He made several films afterwards which are remarkable too. He will always remain in our hearts. This is tribute from WFCN. Rest In Peace sir.