Dev D is one such flight of fancy from the filmmaker that definitely defies all conventions and demolishes all moulds.Not only does it rewrite the technique of the artistic medium, with its unusual cinematography, dizzy editing, non-linear plot narration, turn... read more 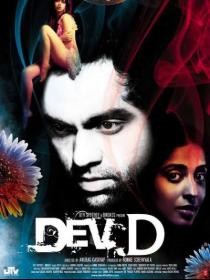 Dev D is one such flight of fancy from the filmmaker that definitely defies all conventions and demolishes all moulds.Not only does it rewrite the technique of the artistic medium, with its unusual cinematography, dizzy editing, non-linear plot narration, turn-of-the-century dialogues and breathtakingly bizarre audio track (music: Amit Trivedi, lyrics: Amitabh Bhattacharya), it completely revises the ancient text which has already made its mark in its various avtars, the latest being the high-pitched rendition of the self-destructive hero by Shah Rukh Khan in Sanjay Leela Bhansali's Devdas.
Dev D (Abhay Deol), unlike Devdas, isn't a blast from the past. In his rootlessness, his lack of purpose and his complete disconnect with the real (read traditional) world, he reflects the mindset of the archetypal new millennium 20-something who doesn't know how to blend tradition with modernity, permissiveness with orthodoxy, Oxford with Bhatinda. And so, he asks his childhood sweetheart, Paro (Mahi Gill) to send him her nude photographs through e-mail, yet can't handle the quandary about her virginity and pronounced sexuality. In a fit of aggrieved machismo, he spurns her wild sexual adventurism which sees her cycling to the neighbouring fields at the break of dawn with a mattress meticulously rolled up on the carrier for a clandestine tryst with him. (Ever seen the bharatiya naari do this in Indian cinema? Bravo, brave new Bollywood!) Little does he realise that Paro isn't mere putty in his hand and is unwilling to subject herself to any kind of ‘emotional atyachar', in the name of love.

Having given vent to her anger and pain, she simply moves on while the already disconnected Dev becomes even more dysfunctional with his alcohol and drug addiction. He moves to a seedy hotel in Paharganj and ends up after a drunken stupour in young Chanda's (Kalki Koechlin) pink and purple boudoir. Once again, Kashyap reinterprets the self-sacrificing courtesan, Chandramukhi in completely post-modern terms. Here, she is Lenny, the schoolgirl who ends up as the sex worker, Chanda, after being disowned by family and friends because she featured in a lewd MMS, that sent the whole nation in a lustful tizzy. `And they call me a slut!' exclaims the feisty escort who attends college by day and plays Florence Nightingale in shorts by night.

The relationship between Dev and Chanda begins with hate, scorn and derision with the decadent Dev unleashing his chauvinism and me-centrism on the hooker. But when the haze of cocaine lifts, the heartburn begins, once again. After having stooped to unimaginable lows, our hero dreams of a second chance. Will he get it or is Devdas destined to waste away forever? The last we saw him was at a non-descript momo joint in the seedy by-lanes of Paharganj, waiting for nirvana. Of course, he's all by himself, since proud little Paro's moved on and survivor Chanda's too strong to play doormat, willing to give up her slutty ways, for love alone.

Dev D is indeed a coming-of-age film, not merely for the protagonist, Devender Singh Dhillon, but it is a brilliant breakthrough for Bollywood too. It really doesn't matter whether the film ends up as a box office scorcher. What matters is the fact that for the discerning viewer, Dev D is a tryst with milestone cinema, reminiscent of Baz Luhrmann's Shakespeare-shaken-and-stirred in Romeo and Juliet. Kashyap, however, gets even more adventurous and adds a progressive flourish to both the plot and the characters which are played to perfection by the three lead players. If Mahi and Kalki are riveting new finds, assured of a long innings in cinema, then Abhay Deol adds a whole new meaning to the term `Unconventional Hero'.