The Handstand Heard 'Round the World

The True Story of an aspiring 11 year-old gymnast with dreams of an Olympic berth risks her future attendance at school and her athletic career as she is inexplicably banned from performing simple cartwheels and handstands on her Charter School campus. Elem... read more 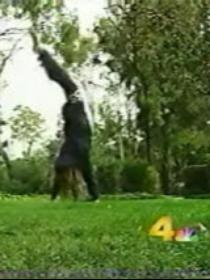 The True Story of an aspiring 11 year-old gymnast with dreams of an Olympic berth risks her future attendance at school and her athletic career as she is inexplicably banned from performing simple cartwheels and handstands on her Charter School campus.

Elementary School 6th Grader, Deirdre Faegre, is singled-out by campus aides performing basic gymnastic skills soon after the school year begins, provoking a parental response that follows an inquiry as to the source of the restriction; a Mean Ole Principal.

Denise Patton is the Principal of San Jose Edison Academy, a Charter School in Southern California who has directed the enforcement of campus-wide restrictions on gymnastics; a former gymnast herself.

Deirdre's Father Leland, a Candidate for Congress, informs Patton that her Campus-Wide regulation is unworthy of a Charter School, implicitly warning the Principal that continued enforcement will be consequential.

Concerned about the significance of her decision, Dr. Patton informs Edison Schools CEO, Chris Whittle, who dismisses her apprehension of Deirdre's defiance, affording her the full consequence of her decision.

In the run-up to the General Election, Leland informs the San Gabriel Valley Tribune of his Daughter's conflict with Cartwheel Cops in the course of the interview about his Congressional Race which prompts a pending story by the newspaper on Patton’s Handstand Ban.

But in advance of its publishing, Dr. Patton suspends Deirdre as the Veteran's Day weekend begins and upon notification of her suspension, Leland and Deirdre immediately visit the Tribune Reporter and the media frenzy gets into full swing the following morning with radio, television, blogoshpere and digital age social media conjoining as Deirdre's suspension becomes the 3rd most popular story following only the Murder Verdict of Scott Peterson and Yasir Arafat's death.

With Media appearances including Jimmy Kimmel Live!, The Today Show and Ryan Seacrest, Deirdre's suspension becomes an international story as seen in the London Times, the Australian Broadcasting Corporation and translated into foreign language publications around the world.

Overwhelmed by Deirdre's International acclaim and concern about the reputation and share price plunge of Edison Schools, Chris Whittle's indifference to Dr. Patton's original concern now calls into question his judgement and leadership of the national charter school corporation and his nascent micro-management of Patton’s response to the Cartwheel Suspension.

Upon her return to San Jose Edison Academy following the Veterans’ Day Weekend, Deirdre is received by a throng of media, parents, students and Dr. Patton, who has been instructed by Edison Schools’ CEO, Chris Whittle to, ‘find a place for her to do her cartwheels,’ who celebrate the success of her civil disobedience, valor, virtue and her 'Handstand Heard 'Round the World
1 Reviews
Write a Review: