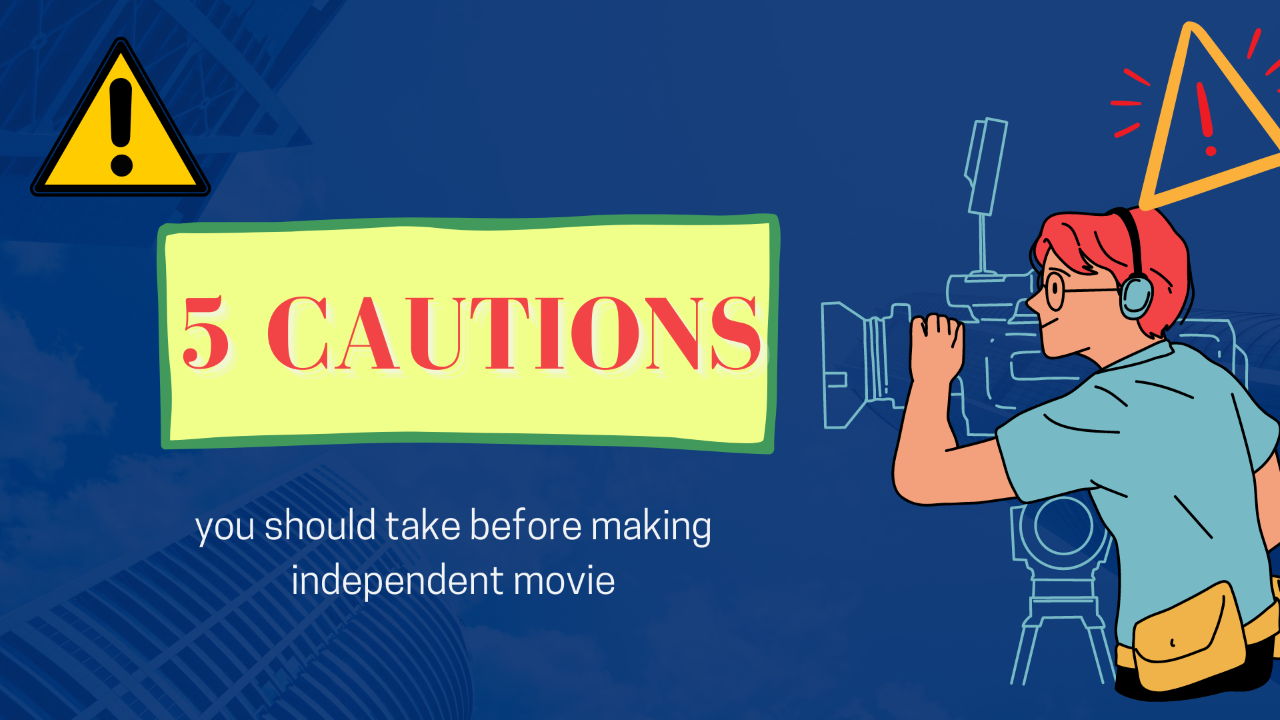 5 cautions you should take before making independent movie

Independent filmmaking is not a matter of joke. Apart from the monetary aspect there are many things that can pull you down. You know as they say, ‘first impression is the last impression’. That’s why if you are a student filmmaker, and it is your first time making a full feature film, then you have to be very careful during the whole process, constantly keeping in mind that this is your ultimate chance to make an impression.

There are 5 cautions that you should take before making independent movie. Let us discuss this further below:

There is a popular saying in the film industry that a writer can never a be a good director. Somewhat it is true- artists are often blind toward ther creation and can never find any fault in that. Same goes with script writing. Often times, when a writer-turns-director, s/he cannot see their faults.

They often reject good scripts just to film their own story. It is a huge gamble to be honest. So its better to have an impartial, open mind when selecting a story/script.

We understand indie filmmakers tend to hire people from their friends or family circle just to manage the budget. It is also true that finding under-budget over-efficient cast is a lot of work indeed.

Actors are a medium to tell your story. You have to make sure they are doing their job properly. There is a thin line between acting and over-acting. You need to find that buffer zone and be careful about it as much as possible,

Never shy away from taking auditions, even if they are your loved ones. See if they fit the character at all. If there is a slight hope, then host workshops with them to polish their character understanding.

Before even starting to make an independent movie, you need to plan a budget. That budget cannot be very tight (penny by penny). Leave a few bucks for film submissions at upcoming film festivals, any future inconveniences.

Consult a film professional before starting to film the movie. Be financially prepared for any mishap. Life is unpredictable, hence, it is better to prepared to face the challenges, rather suffer later.

Let’s face it: you are not a one-man-army kind of guy, it is possible. You need a good group of trustworthy people whom you can call your crew. Good cameraman, Hairdresser, make-up artist, Costume designer, Lighting, Editor- everyone needs to be in sync during the entire filmmaking process.

Being practical in life makes a huge difference It’s your first ever film. You should never expect it to be marvelous at first time. Yes you have talent and potential, but what lacks is experience, So, stay as humble as possible. You film might be criticized at various film festival but take those as a lesson.

You can use those criticisms to make a better film in future, and that will surely be marvelous. However, there are a list of film festivals who are now honoring the courage and passion of new budding student filmmakers by giving them laurel and certificates. You can submit your film there to get validation.

As a wise man said: “ Do your work, without the expectation of the results.”