Coming together to explore new cultures and celebrate creativity will always be important and VIFFMP is the perfect medium for that. Visual literacy is an aptitude for this century and VIFFMP brings together the highest-quality stories to learn from. VIFFMP exists to inspire audiences and keep the excitement alive for cinematic experiences.
VIFFMP is a meeting place for filmmakers and people who are interested in the world in its variety, different approaches to life, film as an art form, a medium, and a tool of social expression. VIFFMP offers filmmakers a platform to introduce their work and discuss topics shown in the film as well as the filmmaking process. Helping at the frontline of an increasingly polarized world. Speaking multiple languages, VIFFMP gives the ability to hear a rich diversity of voices from the divided areas.
VIFFMP is not out there just for the sake of films. We are enliven with an idealism that enables filmmakers and diverse communities to share their ideas in close personal contact.

Madhya Pradesh is our special focus. Our main aim is to promote and create interest in filmmaking in Madhya Pradesh, especially in small districts. We have decided on a zero-entry fee for the residents of Madhya Pradesh. Filmmakers from MP need to submit address proof to enter their films, documentaries, short film, Music videos into the festival.

The subject of Focus- Tribal people, their life and culture.

VIFFMP feels proud to announce that we have special subject category-Tribal People, as the official selection we will show films based on tribal people. There is no entry fee for this category.

1. The film must have been completed after January 2011.

2. Entries in any format (PAL/ NTSC) are accepted. Festival Management will not be responsible if the film is not screened due to technical problems with the film.

3. Total running time for short films must be less than 30 minutes & 150 minutes for full-length films, including credit titles. There is no minimum running time.

4. The short film can be in any language or genre. All non-Hindi and English films must have English sub-titles for festival presentation

5. The original film may be produced on 35 mm, 16 mm, HD, DIGI BETA, BETA SP, U-MATIC, DV, DVD, But the film must be available for preview purposes for the technical committee, the selection committee, and jury panel.

6. One DVD/ Removable Storage needs to be submitted along with the entry. Each Preview DVD should be labeled with the title, Running time, Contact E-mail and Phone number,
OR
Submit films via a private online link through Vimeo, Google Drive, or We Transfer, etc. scanned entry form & fee payment details at [email protected]

7. Multiple entries can be submitted, but with separate entry forms, preview media, synopsis/description, should be enclosed. Each film is considered as a new entry.

8. Once the film is submitted can’t be withdrawn in any circumstances, however, the festival director reserves the right to disqualify any film on certain grounds.

9. By submitting films to Vindhya International Film Festival Madhya Pradesh, filmmaker/producer takes the whole responsibility of copyright issues of music, script and other creative and technical aspects of the film.

10. Short films/Documentary/ Music Video that is submitted must be the entrant's original work and shall not infringe on any copyrights or any other rights of any third parties, the entrant agrees that the Vintage International Film Festival will not be held liable for any copyright infringements perpetrated by you or your short film.

11. For promotional or publicity purposes, excerpts from any film entered in the festival may be shown on any Television Network/Internet or related media during the festival period.

12. Transportation and insurance costs of DVDs, related documents, photographs and publicity materials from the country of origin to the Festival Office shall be borne by the applicant.

13. Entry Forms with incorrect/inadequate/illegible/ambiguous particulars will not be considered. The festival committee reserves the right to accept or refuse any film without assigning any reason whatsoever.

14. The competition is open for professionals as well as students. No separate section for student filmmakers.
15. Entrant agrees to be bound by all terms of these official festival rules and regulations as established herein. The Vindhya International Film Festival Madhya Pradesh reserves the right to extend the Festival deadline and to change the festival venue for any unforeseen reasons if needed.

16. Entrants will retain all ownership rights to their films submitted.

1. The decision of the Jury will be final and can’t be challenged.
2. Winners are selected by a judging panel of industry professionals consisting of independent producers, production companies, filmmakers, and other film industry professionals who may be substituted at the discretion of the Festival organizers.
3. All films are judged equally based on:
a. Content Originality (Quality of storyline, and script)
b. Production (Camerawork, lighting, and shot composition)
c. Post-Production (Editing, transitions, pacing, continuity, and flow)
d. Image (Focus, color, and lighting)
e. Sound Quality (Clarity, consistency of audio levels, and lack of noise)
4. The decision of the selection committee is final and no correspondence will be entered into Finalists will be notified by mail and/ or phone call. The Vindhya International Film Festival Madhya Pradesh will use its best efforts to announce the selected films, winners at the designated time, but will not be held liable for any unforeseen delays.
5. Vindhya International Film Festival Madhya Pradesh organizing, selection committee members, juries are not allowed to participate​ in the respective festival as a contestant.

· Submit Films via a private online link through Vimeo, Google Drive, or We transfer, etc., scanned entry form & fee payment details at
[email protected]
Or
· media along with entry form, fee, and other details mentioned in the application form at the given address.
Or
· Online Submission Site – WFCN

Filmmakers are requested to submit the following information via email at
• Synopsis of the movie.
• Crew & Cast List.
• Biography & Filmography of a Film director.
• Photograph of Director.
• Still and Posters of the film in JPEG format. 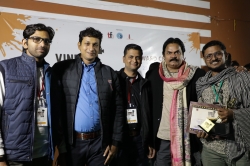 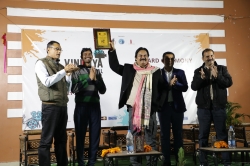 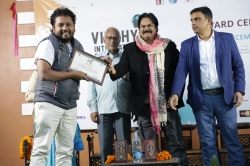 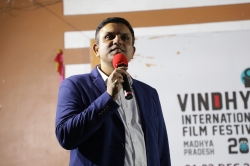 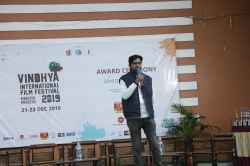