Dasein is a non linear, post modern, meta-narrative film. In this film the filmmaker tries to reinvestigate the core values of existentialism, nihilism, futurism and deconstruction theory. The film deals with issues such as personhood, mortality and the parad... read more 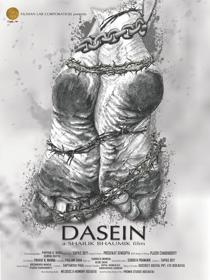 Dasein is a non linear, post modern, meta-narrative film. In this film the filmmaker tries to reinvestigate the core values of existentialism, nihilism, futurism and deconstruction theory. The film deals with issues such as personhood, mortality and the paradox of living in relationship with other humans while being ultimately alone with one self. The story revels that morality does not inherently exist, and that any established moral values are abstractly contrived. It explores the roots of eternal human desire and despair. The crisis of existence and human values in today’s material world has been portrayed in the film. “DASEIN” belong to the Meta modern art, where hybridisation of different genres, art forms and cultures are observed. Paradox, scepticism and absurdity are the key features of this film. Its narrative landscape, it’s narrative tenor, the sense of the uncanny that it is enshrouded in that way it works less in literal sense and more in figurative way. The film proceeds according to dream logic. It is a voyage from one’s consciousness to sub consciousness and at times the boundary between reality and hyper reality becomes blurring. “DASEIN” is an experimental work. Experimentation in all aspects of filmmaking i.e. narrative structure, acting style, cinematography, editing, sound designing, colour toning has been done. Finally this film is all about one’s search for the absolute truth, his inner self and salvation. In this film the filmmaker tries to redefine the cinematic art form in an unconventional way.

Shailik Bhaumik was born on September 17, 1984 in a small town of Bengal, India. He was born into a middle class cultural Bengali family.
He is the son of Sasanka Sekhar Bhaumik and Mrinalini Bhaumik. His father (Alive) was a school teacher and a communist party activist. Shailik was grown up in a small town “Mahishadal” which was known for it’s historical and cultural significance. Bhaumik family always had inclination towards art and music. Shailik’s mother had immense interest in music so she arranged music training for her son and two elder daughters.
Shailik was sent to primary school at the age of seven. There he met his alter ego Arun Bhunia. They became friends forever. Shailik was always a good performer in school. In 1997 he received National Scholarship award for educational excellence. During his school days Shailik developed his interest for film.
The films of Satyajit Ray, Ritwik Ghatak, Mrinal Sen, Shyam Benegaal, Adoor gopalakrishnan had huge influence on Shailik. That time he started reading film reviews and articles in news papers and magazines.
After competition of school, Shailik enrolled to the Engineering College for pursuing his graduation in Chemical Engineering. In 2005 Shailik completed his degree and went to Gujarat in search of a job. He worked for nine years in different MNCs, all over the India.
In 2011 he got married to Paulami Saha. Paulami is a Software engineer by profession. She has great influence on Shailik’s life. Shailik gradually had induced his addiction for films to Paulami. In 2013, Shailik decided to start his career in Filmmaking and left the job. In July, 2014 he started shooting for a short film initially named “Few moments before death”. Finally it turned into a narrative feature “DASEIN”.
“DASEIN” is not merely a film to Shailik, it’s his life line. The production of “DASEIN” was completed in July, 2015. Now Shailik is in search of a distributer for the theatrical release of “DASEIN”.

Dasein is a Meta modern, experimental, polyphonic film. In this film we tried to tell a very common story in an unconventional way. The basic concept of the film is to discover the essence of each being. The film explores protagonist’s character through desire, obsession, contradiction, ambivalence & conflict. Being a Post modern film, “DASEIN” is sceptical about religious institution and it rejects all social norms. Its cross storytelling, non linear narrative structure, and different perspective story telling style represent it as a counter cinema. In this film we tried to implement a completely new narrative structure. There are two main plots in this film. One is circular plot and another is a pseudo linear plot. The linear plot touches the circular plot at one point just like a “Tangent of a Circle”. The only connecting parameters of these two plots are two lead characters (Aniket & Hrittika). This narrative structure is a derivative form of “Fractured Tandem (Portmanteau)”. Hybridization of different genres, art forms and cultures has been done in DASEIN. Here we have tried to blend “fiction” with the style of documentary and old Indian opera. So acting style of different art forms could be observed in this film. Time and perspective play an important role in our experimentation. Time has been portrayed as a multidimensional parameter. It moves forward as well as backward direction. For example, in a surreal scene, we have shown Reverse evolution (Unar Tan Syndrome) of human at the reversal movement of time. Sometimes it could be observed that two different time lines co exist simultaneously in a scene. The same character of different time lines interacts with each others at a point of time. Here we portray time as an imaginary parameter. Bookend flashback & Flash forward (Prolepsis) are also used in storytelling to articulate the context properly. Finally “DASEIN” is a movie to experience rather to merely watch as “DASEIN” refers to experiencing one’s own existence.